Traces of the Past

Of Etruscan origin, Lucignano assumes a strategic importance in the Middle Ages in the context of the struggle between Florence and Siena, until the battle of Scannagallo and the following Florentine supremacy over the whole Tuscany.

Every historical period has left important traces, but the domination of Siena had the greater influence on the current artistic and architectural heritage. 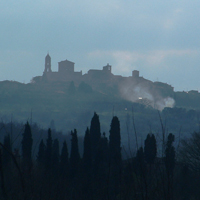 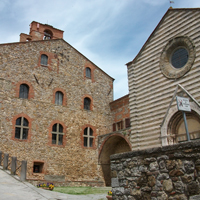 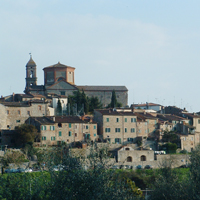 Like many Tuscan towns, Lucignano also boasts Etruscan origins, as proven by the numerous findings that have turned up both from the immediate vicinity of the village and from the surrounding countryside.
The archaeologist Francesco Gamurrini, during the 19th century, discovered two necropo­lis: one in locality Poggio dei Morti (Dead’s hill) - Casalta whose hypogeal chambers gave many urns made of traver­tine and pietra fetida, gold and silvery jewellery, Attic and Etruscan vases with red figures, which are conserved at the Archaeological Museum of Arezzo, and a cinerary statue now at the British Museum. The other necropolis of Moscino yielded buc­cheri, Corinthian vases, four cinerary urns of stone, a kylix with black figures, and other objects that made it possible to date this necropolis between 7th and 6th centuries BC, and are now conserved in the Archaeological Museum in Siena.

The Roman period, rather poor with material evidence, has left its mark in place names and in Literature. In fact, the name Lucignano, in ancient times Lucinianum or Licinianum, derives from the Roman Licini family, who were the owners of vast agrarian properties in this land. Tradition also recalls a triangular tower known as Torre Sillana, in the place where today stands the Collegiate Church, which Silla ordered to build during the wars against Marius. A memorial stone, which recalled Silla and the fortification that he commissioned, suppos­edly dates to this period but was destroyed during the 17th century. The oldest written records of Lucignano seem to date indeed to the time of the Romans, and are reported in Book V of Strabo’s Geographia and Book XV of Pliny the Elder’s Historia Naturalis, praising the high quality of the oil of our hills. 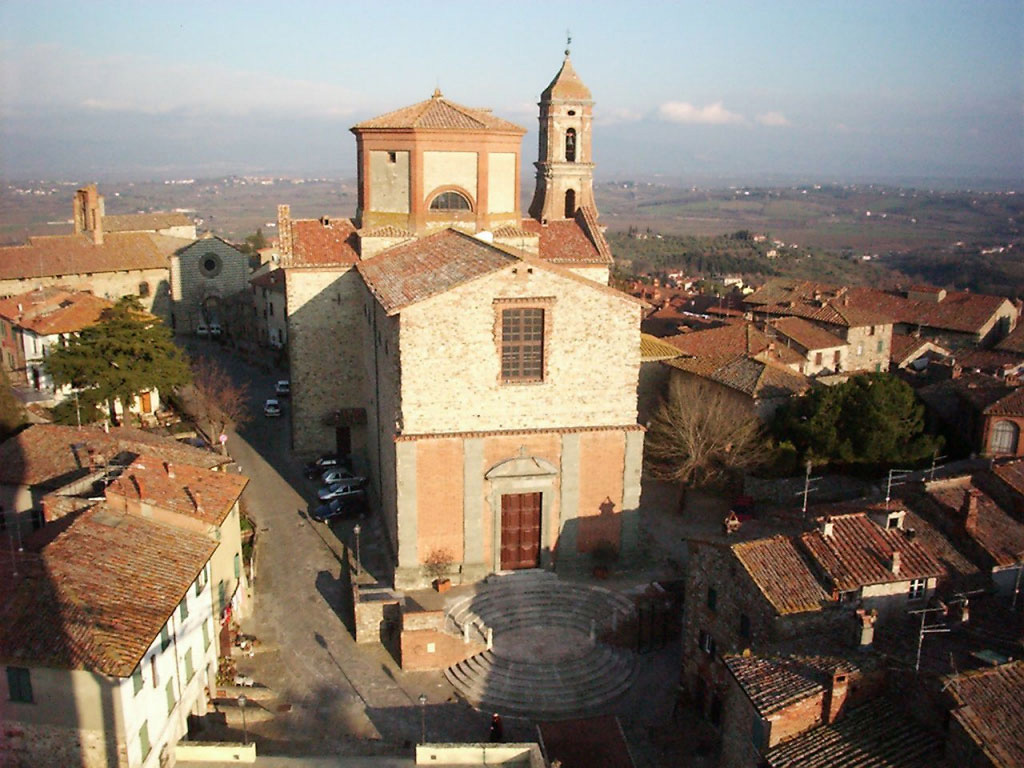 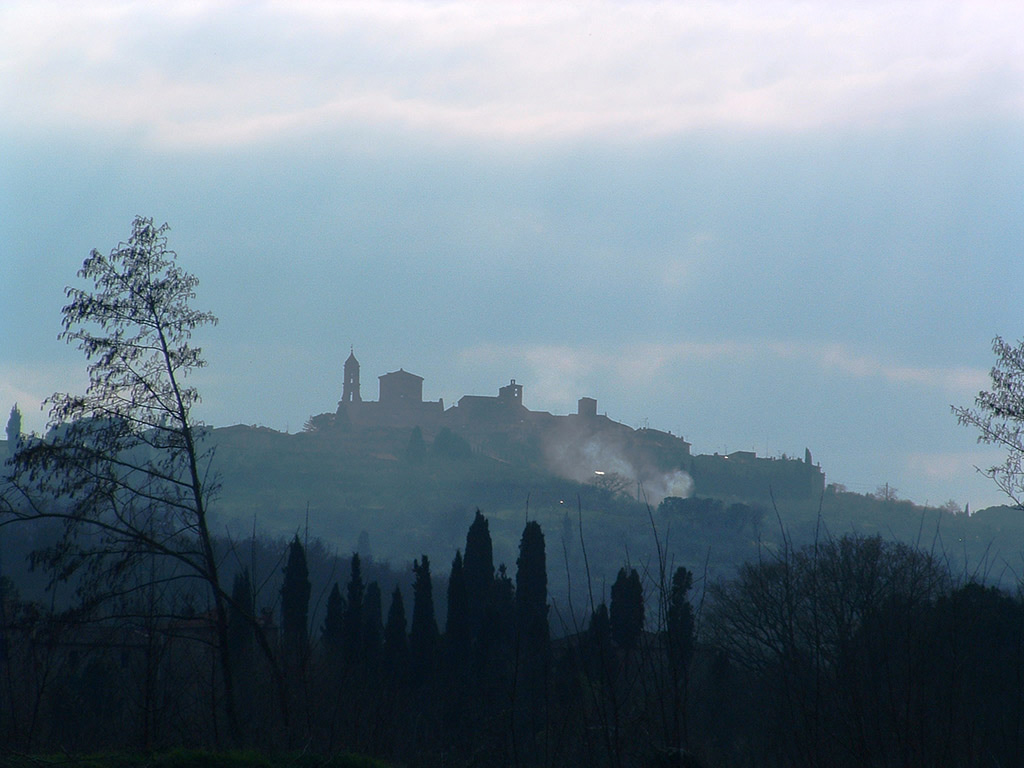 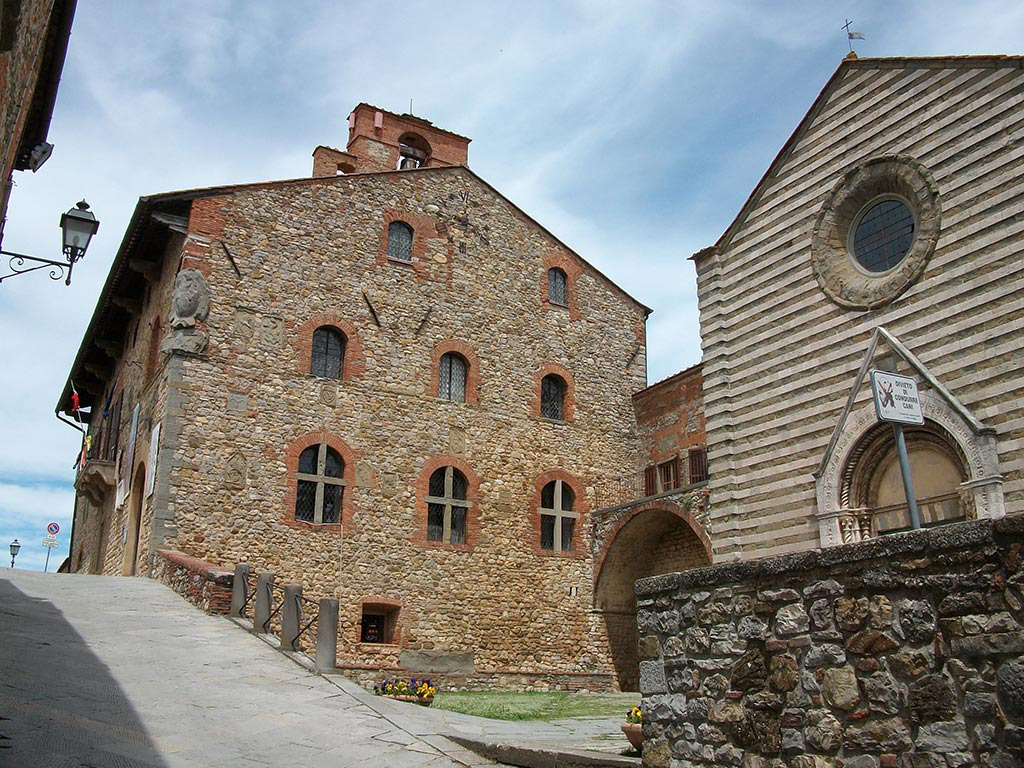 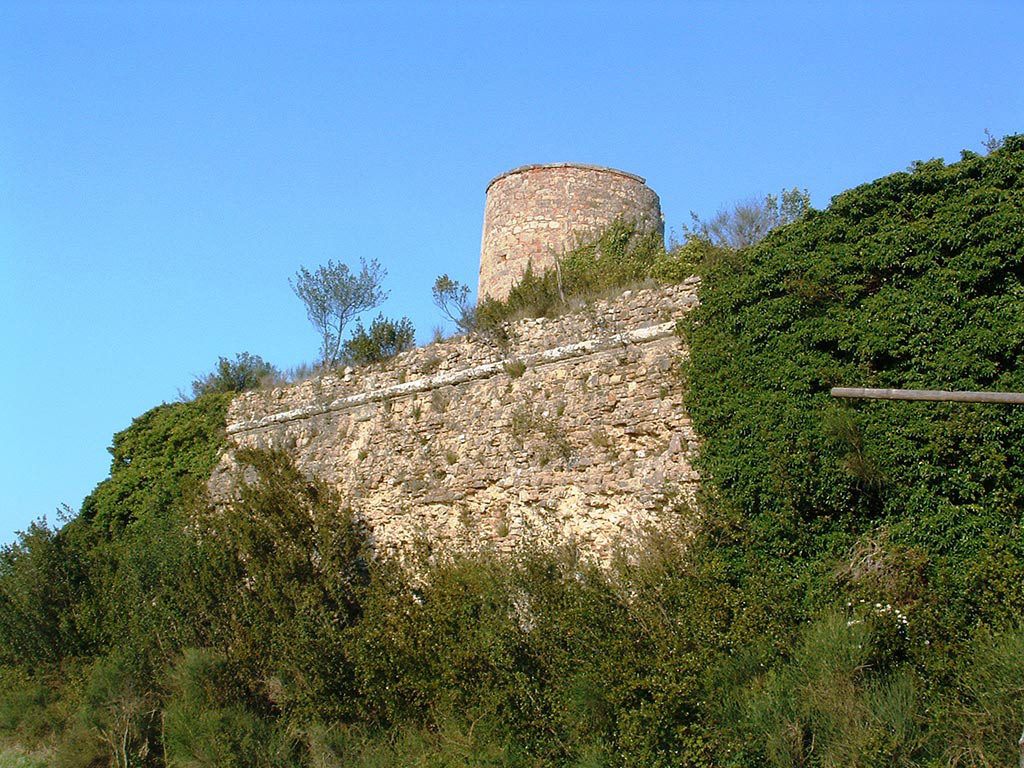 The Middle Ages and the Modern Era

Lucignano achieves an important role in the Middle Ages thanks to its strategic location on the border between the various emerging powers. The town entered the orbit of Siena at the end of 1200 and throughout the 14th century it passed hands several times between the dominant cities: Arezzo, Siena, Florence and Perugia, each of which contributed in different ways to the development of the current Lucignano. The winged griffin in the coat of arms of the Community is a legacy of Perugia; Siena realized the city walls, as well as the keep, which was completed in 1374 by architect Bartolo di Bartolo; Florence erected the Fortress outside the walls.

If the XV century was a flourishing time, marked by the domination of Siena, in the middle of 1500 tranquility was disturbed by the hegemonic project of Cosimo de’ Medici, who undertook several military actions in the region of the Republic of Siena. Lucignano thus passed several times from Sienese hands to Florentine’s, until the decisive battle of Scannagallo. The Florentine army led by Gian Giacomo de’ Medici, Marquis of Marignano , faced Piero Strozzi and the French-Sienese army along the Scannagallo ditch , between Foiano and Pozzo della Chiana. At the dawn of August 2nd 1554, the troops of Marignano joined battle and after several hours of fighting they had the upper hand on the Sienese.
The reunification into a single State of almost all of Tuscany was one of the causes that determined the decline of those places that, like Lucignano, for centuries represented a stronghold in defense of a difficult border. The small village lost a large part of its importance, at least from the military point of view, and became a peaceful agricultural village. The arrival of Napoleon and the subsequent annexation to the French Empire briefly disrupted the life of the country (1808-1814), but left an indelible mark with the suppression of St. Francis’ monastery.

Lucignano is the birthplace of numerous personalities who have distinguished themselves in the Humanities, Music, Sciences, and Arts. Among them, it is worth recalling three who, more than others, are still present in people’s minds: beginning from the most distant one in time, Francesco Dini, to Giovanni Rosini, and then Giuseppe Rigutini.
Francesco Dini was born on April 29th 1661. He was lawyer and magistrate, but he became famous thanks to an interesting work on Etruscan antiquities, which constituted one of the first historical treatises on the Valdichiana. Another personage very dear to the inhabitants of Lucignano is Giovanni Rosini (1776-1885), to whom is dedicated one of the main streets of the town, as well as the theatre and the municipal band. A prolific writer, whose name is remembered above all for a historical novel which caused a conflict with Manzoni and gave him great fame. Rosini was undoubtedly one of the leading forces in the cultural life of Tuscany of his time, a friend to scientists, writers, and poets, among whom was Giacomo Leopardi.
Lastly, Giuseppe Rigutini, a renowned lexicographer who was born in Lucignano on 31 August 1826 and died in Florence on 23 May 1903. Since 1866 he was a member of the Academy of the Crusca, with the special appointment of compiler of the national dictionary. His production of anthologies for the schools of every order and category, as well as of translations of the most important Classics (Plautus, Cicero, Suetonius, Phaedrus, Catullus) was enormous. 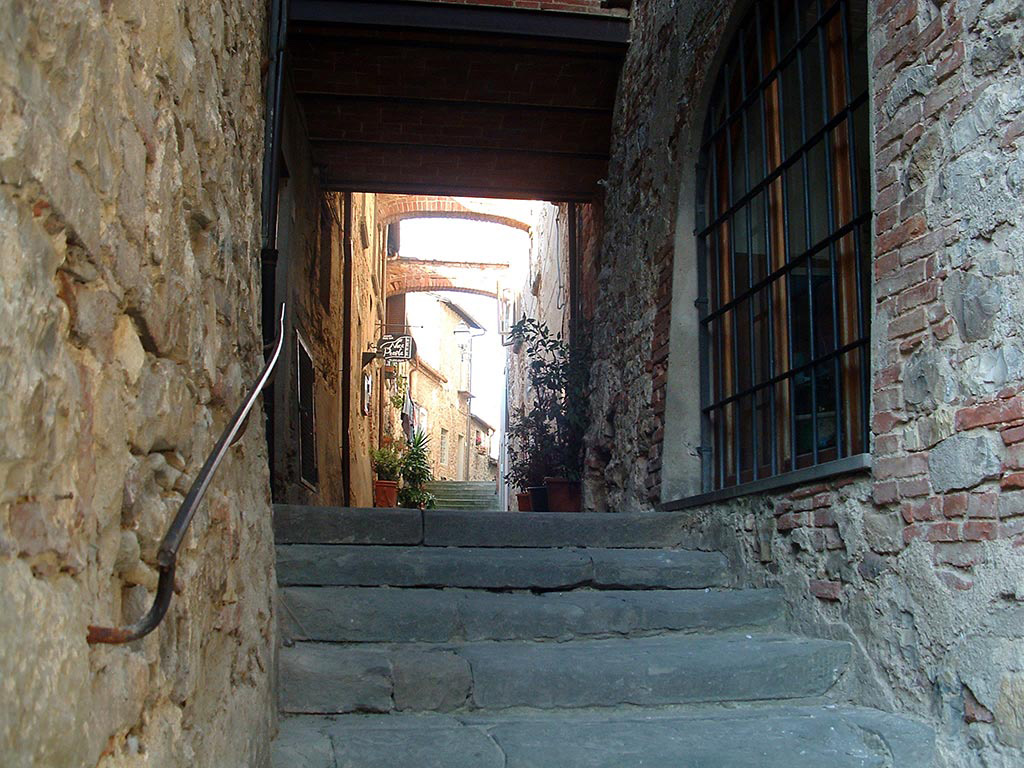 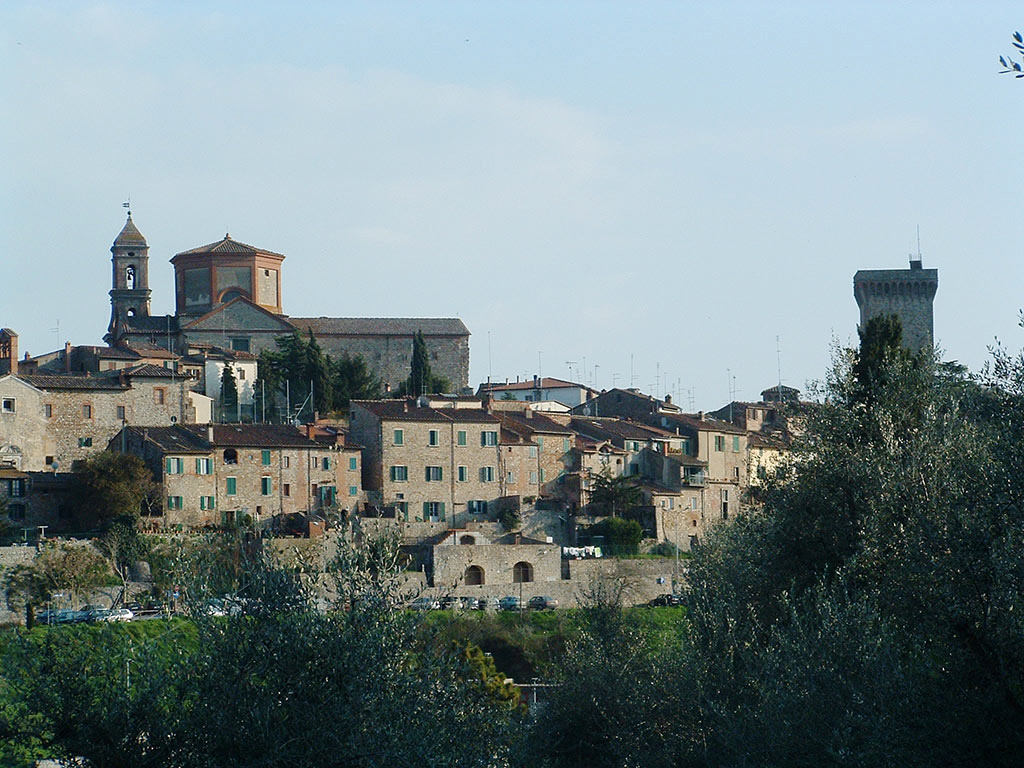